The Run and Centrum Team Sprint

Tuesday I competed in the cross country race The Run organized on Norra Djurgården in Stockholm. I did the 10 km, and ran a 5 km loop two times. It was not any other really good runners in the start field, and I was running alone in the lead most of the race, trying to keep a steady speed. My winning time was 35.47. The course was really nice, and I recommend other people to participate next year, or in one of the other The Run races held in Sweden later this years. 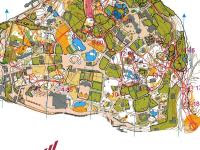 Yesterday I competed in Centrum Team Sprint on Skansen in Stockholm. I was in team with Nick Simonin, and we did 2 lags each. Nick did the first and third leg, and I the second and last leg. It was a really strong start field, with a lot of good runners, and a nice race format.

The second leg was inside the open air museum and zoo on Skansen. It was really cool to run there, and the map was very detailed. It was a lot of controls, and both longer route choice legs and many micro route choices. My orienteering went OK, but I felt a bit tired in my legs after The Run the previous day. The last leg was in forest on Södra Djurgården, just outside Skansen. The east part was nice for a forest sprint, but many of the legs was very simple, and a bit boring. Again I was pleased with my performance.

Anders Holmberg and Olle Boström from Järla won the relay. Nick and I finished as 6th team, but was unfortunately disqualified because Nick skipped a control on Skansen. We will come back stronger next time! Annica Gustafsson and Helena Karlsson from IFK Lidingö won the women's class. Results
Posted by Øystein Kvaal Østerbø at 11:58