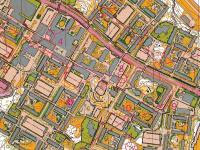 Last week I was running 3 races, in addition to much training. In total I did 15 sessions with running, so it was a hard week for me.

Tuesday it was the District Championship in Sprint in Stockholm. I did a good performance, except the route choice to the 7th control, where I lost 15 sec. My result was a 4th place, 21 sec behind Yannick Michiels. 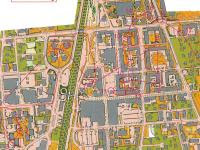 Thursday it was a Silva League Sprint in Kumla, south of Örebro. My performance was quite good, I but lost 5 sec to the 3rd, 10th and 14th control. My result was a 8th place, 32 sec behind Jonas Leandersson. The start field was very international, with 7 nationalities among the 8 best runners! 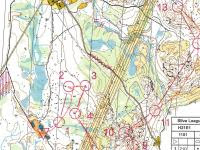 Saturday it was a Silva League Middle distance in Kilsbergen, north west of Örebro. I did no big mistakes, but lost 15 - 30 sec to several controls, and had big problems running fast in the parts of the terrain with stony ground. My result was a 30th place, 4 min behind Gustav Bergman.

Sunday it was a Long distance in Kilsbergen. I was not entered this race, because I thought 3 races was enough in a week, and wanted to do a long easy run. My team mates in IFK Lidingö Fredrik Johansson and Filip Dahlgren did really well, and came 2nd and 3rd, only beaten by Thierry Gueorgiou.

Physical I was a bit tired on the races after a though training week, and was not really able to speed up on the longer legs. This week I will train less, so I'm in better shape to the Norwegian selection races in Long and Middle the coming weekend. But I will still do some harder sessions, competing in the 10 km cross country race The Run on Norra Djurgården tonight and Centrum Team Sprint on Skansen and Södra Djurgården tomorrow.
Posted by Øystein Kvaal Østerbø at 15:59