Last week I spent in Switzerland with my club IFK Lidingö. In five days we did 8 training in relevant terrains for the World Orienteering Championship 2012. The camp was well organized with help from our Swiss runner Ines Brodmann, and challenged us in all the types of terrain we will meet next summer. I am glad I am running for a club that priorities to help the runners to prepare well for the international championships like WOC and EOC, and not only focus on the big relays. 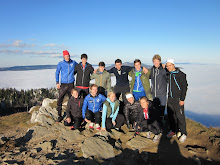 Friday Night we participated in the first race of the night orienteering league Bern by Night. The terrain was steep and the fog made it difficult to have a good overview. I did a quite stabile performance, and was in the leading group until the second last control. There I lost 3 minutes in an area where the map was a bit strange. My club mate Filip Dahlgren handled it well and won the race. Results

In my Digital Orienteering Map Archive you can now find maps from all the training. On some of the long distance trainings we were testing route choices and I was not always running where I thought was fastest. Some places the vegetation had also changed since the map was made.

Last weekend I was running Smålandskavlen in Mariannelund, my last competition of the season. IFK Lidingö won the relay last year, and we wanted to perform well also this year. Unfortunately we lost some time on the two night legs on Saturday and I started 10 minutes behind Kalevan Rasti on the restart Sunday morning. I missed the second control with more than one minute, but ran well the rest of the leg and could keep the distance to KR and catched up several teams. Filip Dahlgren and Fredrik Johansson ran well on the two last legs, and we could finish as 9th team, 7 minutes behind KR, after being the fastest team on the three day legs. Results
Posted by Øystein Kvaal Østerbø at 07:35 No comments:

In the middle of October I was running traditional race Blodslitet in Fredrikstad. This year the Open Norwegian Championship in Ultralong distance was included in the 25 km long mass start race, with 3 forked loops in the beginning and a long common loop in the end.

I did some mistakes in the forked loop, and was running alone the last one and half short loop. On the long last loop I stared out 5 minutes behind Anders Nordberg, and 1-2 minutes behind a group of several good runners like Olav Lundanes and my club mates form Lidingö Filip Dahlgren and Fredrik Johansson.

I stared quite offensive on the last loop, and held the same speed as the runners in front of me for a while. But after running a long time without seeing any other runners I started to loose some motivation. I was also really tired, since I have only been able to do a few runs longer than one hour since July because of the trouble I have had with my back. I finished as 12th runner, 13 minutes behind Nordberg who won with a big margin. Results, GPS tracing from the forked loops and the last loop
Posted by Øystein Kvaal Østerbø at 11:13 No comments: