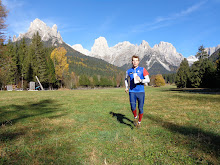 In the beginning of November I had a 10 days long trip to the South of Europe. My goal for the trip was to run some good competitions and training in warm weather, with main focus on sprint orienteering.

The trip started with the 2 day competition TICBCN in Barcelona, that I already have written about. After the races I stayed two more days in Barcelona.

Monday I took it quite easy, and did some work on my laptop in the morning, before I went to the city for sightseeing and an easy run in the evening. Tuesday I did 2 sprint trainings in the morning and a strength training in the evening. My team mate in IFK Lidingö Biel Rafols and his family was very helpful, and let me stay in their home during my time in Barcelona.

Wednesday morning I took a flight to Treviso in Italy, and continued with train to Primiero in the Dolomites, where I stayed with my friend Giancarlo Simion. JWOC was arranged in Primiero in 2009, and it is a lot of good maps covering nice terrains in the area. 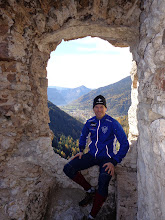 The first night I did a sprint training, and on Thursday I was able to run on both the map from the JWOC Relay and the mens Long distance course on Passo Rolle. The view in the Dolomites is fantastic, as you can see on my pictures from Primiero, and I was also able to taste the local food and drinks.

Friday I continued my travel to Venezia, where I was running the Venezia street orienteering race, that I also already have written about.

I did also some trainings on my own in Venezia, to prepare for the WOC 2014 Sprint, that will probably be arranged in the east part of the city. Maps from all the competitions and most of the trainings can be found in my DOMA.

World of O has at the moment a competition where you can vote for Course of the Year 2012. A lot of courses I  have been running are nominated, and I was interview by World of O in connection with the nomination process.

Here you can watch a video from the race in Venezia:

Posted by Øystein Kvaal Østerbø at 19:53 No comments: 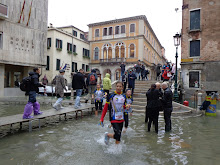 Last weekend I travelled to Venezia to participate in Venice Orienteering Meeting. I thought it would be a good training for the WOC 2014 Sprint, that probably will be arranged in the east part of the city, and the race is also one of the most challenging and fun race I have been running. I have been participating in 2008, 2009 and 2010, with the results 1st, 2nd and DSQ, so I wanted to change the negative trend this year.

Saturday a open race was arranged in the area around the San Marco Square. I was choosing the longest course that was 5 km, so it was almost the double distance of a normal sprint race. I took it as a good training, without pushing too hard. The course was nice, but could have been more challenging. Results and splits

Sunday the traditional long distance race was arranged, with almost 4000 participants. In the early morning the tide was getting really high, and the organizers delayed the start one hour. When I was going to start as one of the first runners the water was still reaching to the middle of my legs in most of the streets, and over my knees on the middle of the San Marco Square. The organizers still decided to start people, but it was changed to free start time, so the time was taken from you did the start punching. They recommended the runners to take it easy, and walk where it was much water, and the elite runners to wait starting until the water had gone down. 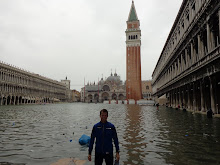 But the race was unfortunately stopped by the police before half of the runners (and most of the best) in the mens elite class had started, due to that the early starting runners had been distracting the tourists and the locals trying to get the water out of their houses and shops. We where still able to get our maps, and I was running the course as a training (in 69 min), after the water had withdrawn from the streets. (In the splits I have got correct split times to all controls, except to the 1st one, where I have approx 3 h 30 min too long time, since the time is from I cleared my SI card before my original start time. The runners who got a time in the results started earlier then I did, when the conditions were worse due to the high water.) The course was really nice this year, so it was a pity the race was destroyed by the high tide. It was also perfect running conditions when I was doing my training, since it was not too much tourist in the streets. So if the organizer had just delayed the start some more hours I think it could have been a great event, but many would than probably not have been able to run before their planed travel home. Results and splits for the runners who were allowed to start, and had quite variable running conditions. 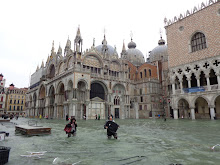 My pictures from Venezia gives a good impression about how it was in the city when the tide was high.

This weekend I have been in Barcelona competing in a 2 day event called TICBCN. I was running the same event last time it was arranged, two years ago, and really wanted to come back. Here you can see my maps from 2010: Sprint, micro sprint and long.

Saturday a sprint was arranged in the historical center. I did a solid performance, and my only mistake was a 5 seconds time loss on my route choice to the 8th control. It was difficult to run full speed in the narrow streets with a lot of people, and you needed full focus the entire time to do a clean race without hesitation. I won the race with 7 seconds down to Yannick Michiels. Results

Sunday a shorter long distance was held from the Olympic Stadium on the Montjuic hill. It was the same place as the long distance last time, but partly a different part of the area. It was very hilly and the 8,4 km long course had more than 400 meters of climbing. I did a mainly good race, and tried to take safe route choices and avoid fences and walls that could be difficult to pass. To the 9th control I lost some time in the control circle and to the 10th control I had as most of the other runners problems to understand from the map exactly where I had to run to get into the castle. I was able to win also today (and overall) in front to Yannick Michiels. Oleksandr Kratov came 3rd, with a small margin down to Pieter Hendrickx. Results Long and Overall 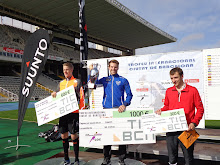 I think TICBCN is a really nice event, and it's on a time of the year when the season is over in Scandinavia and the weather can be quite bad. So it's great to come here and run in short pants and t-shirt when it's 20 degrees and sun. Barcelona is also a very beautiful city, so I hope it will be more foreign runners here next time. I have not taken so many pictures this time, but my pictures from 2010 is worth a look. Then I visited some of the tourist attractions, such as the city center, the harbor, La Sagrada Família, Camp Nou, the Olympic Park and Parc Güell with Gaudí architecture.