This weekend my Norwegian club Wing OK arranged the Norwegian Championships in Sprint and Sprint Relay in Trondheim.

My preparations was unfortunately not the best, since I got sick when I came home from a WOC training camp in Italy one and half week ago. After feeling worse last weekend I went to the doctor and took different tests, and Monday I started with antibiotics. I got better pretty fast, and Wednesday I could start with easy training again, after one week without training.

I had to skip the Middle and Long selection race for World Cup witch was held on Wednesday and Thursday. But that didn't matter too much, since I anyway had planed to skip the World Cup on Kongsberg, because my focus will be on Sprint and Relay until WOC.

But now back to the Sprint Champs. The qualification Saturday morning was held partly on Kristiansten Festning, which was also used for WOC 2010. I did a good race, with safe and controlled orienteering, and got a shared 1st place in my heat. Results and splits. - Kontrollert kvalifiseringsløp, orientering.no

The final in the afternoon was held partly in a new sprint area, with the finish at Solsiden in the city centre. I did a mainly good race, that was destroyed by two big mistakes.

In the beginning of the course I tried to get an overview and decide as many routes as possible. I was maybe too focused on the coming legs, because after the 2nd control I started to read the map on the leg to the 4th control, and didn't understand a thing when it was no opening in the house I wanted to pass through. I got confused when I stopped and looked around, and I also thought I had punched the wrong 3rd control, since mine should have been on a wall, and not a flowerbed. I was running back to the previous control, and than I understood that it was my 2nd control, and I had to continue to the 3rd control. This mistake cost me 20 sec.

It felt like I had lost 20 - 30 sec, and I hoped it was still possible to win the race, or at least get a good position, if I was running fast and error free the rest of the course. After the mistake I was running quite aggressive, and had a good flow from the 3rd to the 11th control.

The other mistake was to the 12th control, where I didn't see the wall closing the opening between the buildings. When I was not able to enter through the building I ran left, and lost 10 sec compared to the right route.

The rest of the race was OK. I took the best routes, but was quite tired after running fast in the middle part of the course, and lost a few seconds to the fastest runners.

My result is a shared 6th place, 16 seconds behind the winner Nicholas Oskarsson. It's good to see that it's severals Norwegian who is running well in sprint, and that I can't do big mistakes like today if I want to get a top position. Gøril Rønning Sund won the women's class. Results and splits. Oskarsson overrasket med NM-gull, orientering.no

Sunday the Norwegian Champs in Sprint Relay was arranged for the first time. I was running the 2nd leg for Wing, who unfortunately didn't have a good enough team to fight for a top position. My performance was not the best either, and I was both feeling very tired and did some mistakes. Halden won after a tight fight with Frol. Results. Fasting avgjorde NM-sprintstafett, orientering.no

Even if my performances was not as good as I had hoped it was a nice orienteering weekend in Trondheim, and I would like to thank all members in Wing for a well organized event. Live center with results and GPS tracking from all races. The organizer's picture gallery from the Sprint and the Sprint relay.
Posted by Øystein Kvaal Østerbø at 23:48 No comments:

2nd in 10mila with IFK Lidingö!

It has been a really good spirit in IFK Lidingö the whole winter, with a lot of runners being motivated, training well and pushing each other. After finishing 7th, 6th and 9th in 10mila the last years, we felt it was time to step up this year, and fight for the top positions. After shoving stable performances in the pre season relays with several team, and having many runners doing well in individual races, we felt it was a realistic goal.

This post is pretty long, and I will both give a short report about how all the guys in my team did, and a longer about my leg.

Niklas Serrander gave us a good start at the 1st leg, finishing 2 minutes behind, after having most of the long forkings. Julian Dent brought us the whole way up in the lead during the 2nd leg, having the fastest leg time. 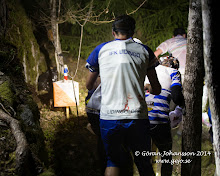 Nick Simonin stayed in the leading group the whole unforked 3rd leg, that this year also was the first with night orienteering. We had hoped it should be possible to get rid of some of the top teams already on this leg, but in stead it tightened together, and Halden was the only favorite that was not in the leading group after this leg. After this leg Klaus Schgaguler changed over in 2nd position for our second team.

Anders Skarholt and Anders Carlsson did as expected stable races on the 4th and 5th leg, and could send out Filip Dahlgren among the first on the unforked Long Night. Also Jo Indgaard did a great 4th leg for our second team, and stayed in the leading group. 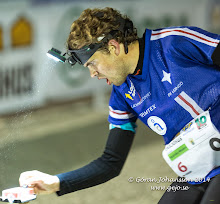 Filip is one of the best runners for a long night leg, and he was leading the group for the first half of the leg. But in the end he got stomach cramps, and had to fight hard to stay in the group.

Erik Ivarsson Sandberg did a great 7th leg, and after having the best leg time he could send me out as 2nd runner on the 8th leg, together with Thierry Gueorgiou (Kalevan Rasti) and only some seconds behind Jonas Leandersson (SNO).

My leg was 13 km long and the last with night orienteering. It was also several really good runners having this leg, so I had big respect for my task. But after running 5 night trainings the week before 10mila I felt quite confident.

It’s smart to watch at the GPS tracking or look at my map when you read my comments, to understand better what happened.

As mentioned I started together with Thierry, and he opened pretty offensive. I had the same 1st control as him, and followed him until he was running too much to the left before the 3rd control (where he had a different forking). I had fully control but came to a control 50 m before my control, and was a bit confused when the code was wrong. But after some seconds hesitation I saw my control a bit futher in the march.

To the 4th control it was very green, and I came too much to the left, but I realized it pretty fast and didn’t loos too much time. Now it was some longer and easier legs. On the way to the 5th control I meet Graham Gristwood (Mora), and on the road to the 6th control I could see a headlamp about 45 sec in front of me, that I guessed could be Jonas.

I picked the 6th and 7th control well (when Graham did a small mistake), and when I came out on the road towards the 8th control I was just behind Jonas, who had been running more to the right compared to me.

On the longer leg to the 10th control I thought left of the water was the best option, but Jonas was running straight (and I wondered if he planed to go right of the water). He could have an other forking, where right was best for him, and I decided to go on my own, even if he could have been a good company.

I was running together with them most of the rest of the course, and we kept a good speed on the longer legs. To the 21st control I wanted to run right, and I was happy when the others followed me. On this leg we caught one minute on Thierry, who took the right route choice.

In the green to the 22nd control I got a stick in my eye, and lost a contact lens. It made it difficult to see the map sharp, and after some minutes I decided to also take out the other lens. I could now see the map clear, but it was more challenging to see since far in the terrain since it was still quite dark.

To the 28th control Jonas and Graham went straight over the hill, and I decided to use the path and go a bit more to the right. Here Jonas had the other forking, and got a 20 sec gap. Graham and I also missed the 30th control with 10 seconds, and I finished as 3rd runner, 30 sec behind Jonas. When I heard Thierry was only 2 min in front of me I got happy, because I know we then still ha a good chance to catch them, since we had very good runners on the last legs.

When I analyze my race afterward I'm satisfied. I lost some time to the 3rd and 4th control, but after that I did really well. I used other runners where it was smart, and did my own decisions where it was necessary. I was accurate in my night orienteering and my runnings speed on the longer legs was among the fastest, and I picked the best route choice every time. 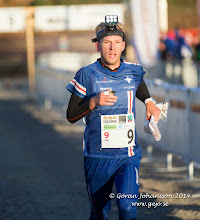 Fredrik Johansson was running the 9th leg, the second longest and the first in daylight. He was able to catch Kalevan Rasti since Fabian Hertner missed in the beginning, and in the last part of the course Fredrik and Fabian managed go get several minutes of down to the following teams.

Mårten Boström started on the 10th and last leg together with Jan Prochazka (KR). Both are strong runners, and I looked forward to an exciting finish. They stayed together in the beginning of the leg, but Jan managed to get a small gap when it was forking, and Mårten did a mistake when he tried to catch up. Mårten had still one of the best times on his leg, and could finish as 2nd runners, less then 2 min behind Kalevan Rasti. 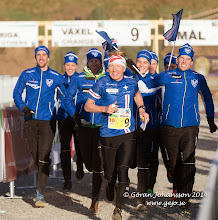 Just after the finish I could feel a little disappointed, because we were so close to win the relay, and then finished 2nd. But now I feel really satisfied and proud to be part of this team. All 10 runners did almost perfect legs, and we followed the plan we had made for the whole relay. Also our second team did well, and where in the lead for the first four leg. Also these runners are part of the great result, because they have been pushing us during the winter and made is necessary for everyone ot perform their very best to try to get a spot in the first team. Lidingö's women's teams did also great, and finished 7th, 17th and 44th. We have already started to look forward to Jukola, that are held in Finland in just one month.

Results and GPS tracking from 10mila.
Posted by Øystein Kvaal Østerbø at 00:03 No comments: