Saturday the Norwegian Championship in Sprint was arranged in Skien. The race was also selection race for Nordic Tour (World Cup) and World Games, and one of the highlights for me this year.

The Sprint Qualification in the morning went well, and I was fastest in heat 1 after solid race. Results, splits and map

The Final was held the same evening. I did a really good technical performance, and think I took the best route choice on all major legs. My result was a 2nd place, 10 sec behind Emil Wingstedt. I had a bit slow start and lost some seconds on the longer legs in the first half of the course, but was fastest in the last part of the course. Results, splits, map and GPS tracking

Skien was a great place for sprint orienteering, and the event was well organized in all ways. The map made by Helge Gisholt was perfect and easy to read in high speed, and the courses challenging and fair. This shows that it's not a problem to make good sprint races if you have experienced map makers and course planers. I hope my club Wing OK will do the same when they organize NM Sprint in Trondheim next year. 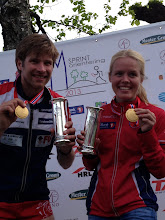 The previous week has been though, with both selection races in Long and Middle distance on Hedemarken and a short training camp with the National Team on Vikersund before NM Sprint. The Long distance went OK, and I finished 8th, 5 min behind Magne Dæhli. (Results, splits and map with GPS tracking) In the Middle I was 12th, 3 min behind Anders Nordberg. (Results, splits and map with GPS tracking)

UPDATE:
This evening it was published that I'm selected to both Nordic Tour (World Cup) in June and World Games in Colombia in August:
Uttak Nordic Tour
- Knallsterkt lag til World Games
Posted by Øystein Kvaal Østerbø at 15:56 No comments:

The Run and Centrum Team Sprint

Tuesday I competed in the cross country race The Run organized on Norra Djurgården in Stockholm. I did the 10 km, and ran a 5 km loop two times. It was not any other really good runners in the start field, and I was running alone in the lead most of the race, trying to keep a steady speed. My winning time was 35.47. The course was really nice, and I recommend other people to participate next year, or in one of the other The Run races held in Sweden later this years.

Yesterday I competed in Centrum Team Sprint on Skansen in Stockholm. I was in team with Nick Simonin, and we did 2 lags each. Nick did the first and third leg, and I the second and last leg. It was a really strong start field, with a lot of good runners, and a nice race format.

The second leg was inside the open air museum and zoo on Skansen. It was really cool to run there, and the map was very detailed. It was a lot of controls, and both longer route choice legs and many micro route choices. My orienteering went OK, but I felt a bit tired in my legs after The Run the previous day.

The last leg was in forest on Södra Djurgården, just outside Skansen. The east part was nice for a forest sprint, but many of the legs was very simple, and a bit boring. Again I was pleased with my performance.

Anders Holmberg and Olle Boström from Järla won the relay. Nick and I finished as 6th team, but was unfortunately disqualified because Nick skipped a control on Skansen. We will come back stronger next time! Annica Gustafsson and Helena Karlsson from IFK Lidingö won the women's class. Results
Posted by Øystein Kvaal Østerbø at 11:58 No comments:

Last week I was running 3 races, in addition to much training. In total I did 15 sessions with running, so it was a hard week for me.

Tuesday it was the District Championship in Sprint in Stockholm. I did a good performance, except the route choice to the 7th control, where I lost 15 sec. My result was a 4th place, 21 sec behind Yannick Michiels.

Thursday it was a Silva League Sprint in Kumla, south of Örebro. My performance was quite good, I but lost 5 sec to the 3rd, 10th and 14th control. My result was a 8th place, 32 sec behind Jonas Leandersson. The start field was very international, with 7 nationalities among the 8 best runners!

Saturday it was a Silva League Middle distance in Kilsbergen, north west of Örebro. I did no big mistakes, but lost 15 - 30 sec to several controls, and had big problems running fast in the parts of the terrain with stony ground. My result was a 30th place, 4 min behind Gustav Bergman.

Sunday it was a Long distance in Kilsbergen. I was not entered this race, because I thought 3 races was enough in a week, and wanted to do a long easy run. My team mates in IFK Lidingö Fredrik Johansson and Filip Dahlgren did really well, and came 2nd and 3rd, only beaten by Thierry Gueorgiou.

Physical I was a bit tired on the races after a though training week, and was not really able to speed up on the longer legs. This week I will train less, so I'm in better shape to the Norwegian selection races in Long and Middle the coming weekend. But I will still do some harder sessions, competing in the 10 km cross country race The Run on Norra Djurgården tonight and Centrum Team Sprint on Skansen and Södra Djurgården tomorrow.
Posted by Øystein Kvaal Østerbø at 15:59 2 comments:

9th in 10mila with IFK Lidingö

This weekend the tradition 10mila relay have been arranged from Kungsängen north-west of Stockholm. My club IFK Lidingö had a strong team this year, and I was really looking forward to run the 9th leg. Our women's team had also set a high standard coming 6th and 13th with their two best teams.

The relay started really well for us and we where top 3 after both the 1st and 2nd leg. Unfortunately our 3rd leg runner did two big mistakes, and changed over more than 10 min behind the lead. That made it a challenging situation for our runner on the Long night, but he did a good race without loosing too much time to the leading group lead by Kratov and Boström. Our 5th leg runner started well picking some seconds on the lead, but also he did a bigger mistake. After that all our runners did great performances (having top 10 leg times), and I was sent out on the 9th leg as 13th runner.

I did a stable performance, following my tactic that was to run close to the line, follow my compass, read on the bigger hills, and be very accurate the last part to the control points. When I changed over I had advanced to a 10th place, having the 3rd best time on my leg. The terraing was very nice, and it was a pleasure to run, (at least in day light). GPS tracking from the 9th leg.

Fredrik Johansson did a good last leg for our team, even if he had a bigger mistake, and could finish as 9th runner. Kalevan Rasti won in front of Halden and IFK Göteborg. On overall I think it was a very well arranged 10mila, with high quality on both maps, courses, arena and the web TV. Results and GPS tracking

The feelings in my team was a bit mixed afterwards. All runners was performing well most of their legs, and a 9th place is quite good. But we had a good chance to take a top position, and the few mistakes we did was too big and very crucial, since the gap to the leading group became huge after the Long night. The runners who did mistakes are normally very stable in night orienteering, but when you did a mistake in the flat and diffuse terrain it was very challenging to relocate. We run together as a team, and next time I can be the one loosing time, and I know my team mates still will do their best for the team and support me. On the last half of the relay we where one of the teams having the fastest time, and I hope we will come back even stronger in Jukola next month.
Posted by Øystein Kvaal Østerbø at 15:59 No comments:

Last weekend the first round of the Norwegian Cup was arranged in Østfold. I have already been writing about Fridays Sprint in Askim, that I was able to win.

Saturday a Middle distance was held in Moss. I did a OK performance, but lost some seconds to the 7th, 13th and 14th control. In total a bit more then one minute. During my morning run I hit a rootstock with my right knee, but it was OK to run the race, even if the knee was quite stiff. My result was a 8th place, 1.42 behind Hans Gunnar Omdal. Results, splits and GPS tracking

Sunday it was a Chasing start, based on the results from the Middle distance. I got a good start, but out of the 4th control some runners starting within a minute behind me got contact. My knee hurt more today, and I got stiff in both my right leg, thigh and hip, and had problems to keep the same speed as the other runners. But they did some mistakes, and several time I managed to get up in the front of the group again.

When we passed the arena I was last, and decided I had to do something, because it was not any point keeping that position. My knee also felt better, and when the other runners started looking tired or doing smaller mistakes I took the command, and was able to stay in front of the group the last part of the course. I finished in 5th position, 4 min behind the first group won by Emil Wingstedt. Results, splits and GPS tracking

In the Norwegian Cup I am in 2nd position, behind Eskil Kinneberg. Mari Fasting is leading the women's class after victory all 3 days.
Posted by Øystein Kvaal Østerbø at 21:58 No comments: