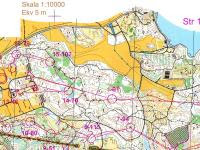 The second weekend in October I participated in the big relay 25manna for my first time. The relay was held in Södertälje, south west of Stockholm, and I was running the second leg for IFK Lidingö. Flip Dahlgren sent me out as 2nd runner. I stayed in the leading group for the whole leg, and changed over as 3rd runner. My only mistake was that I was running in 90 degrees wrong direction out of one of the last controls. After 25 legs Lidingö finished on a 6th place, 6 minutes behind the winner Tampereen Pyrintö. Results
Posted by Øystein Kvaal Østerbø at 21:42 No comments:

October has been a busy month for me, and the last five weeks I have been participating in the World Cup final and two different WOC training camps in Switzerland, 25manna in Stockholm, Blodslitet with Norwegian Champs in Ultralong distance in Fredrikstad, EOC training camp in Mora and Smålandskavlen in Mariannelund.

Maps from all the competitions are now available in my Digital Orienteering Map Archive, and during the coming days I will try to write a few words from each of the different activities.
Posted by Øystein Kvaal Østerbø at 17:19 No comments:

After the World Cup in Liberec the Norwegian team went directly to Switzerland, were we had a training camp in relevant terrains for WOC 2012. We were training both in the Jura Mountains, Mittelland terrain and a nice old city.

The first weekend in October the PostFinance Sprint with World Cup Final was held in La Chaux-de-Fonds. 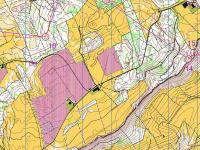 In the middle distance I missed the first control with almost two minute. The rest of the course went well, except a mistake to the 11th control. My result was a 32nd place, 5 minutes behind Thierry Gueorgiou. Results, splits and GPS tracking 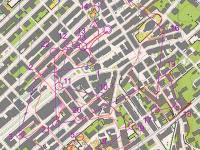 The sprint was the race I had the biggest expectations for. But unfortunately my shape has not been the best this autumn, partly because I had problems with my back for more than one month after WOC, and I did also several small route choice mistakes. My result was a 27th place, 1 minute behind Daniel Hubmann. Results, splits and GPS tracking

In the overall World Cup I finished on a 22nd place. Daniel Hubmann won for the forth year in row.

After the WC final five of the Norwegian runners participated on a sprint training camp in the area around Zurich organized by the Swedish team. In 3 days we had 6 sprint trainings on different maps. 3 of them in competition speed. In total we were running 14 courses, with lengths from 1 to 3 km.
Posted by Øystein Kvaal Østerbø at 17:44 No comments: