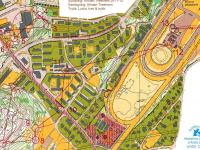 The Norwegian Championship in Sprint was arranged from Øvrevoll gallop racecourse in Oslo last Saturday. I had been sick for almost one week before the race, and my only training was a 30 min easy run the day before. The Qualification in the morning went surprisingly well, and I won my heat with 26 seconds margin. I did a good technical race, and also physical it went OK, even if I got really tired the last part of the race. 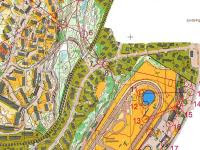 The Final was held the same evening, and unfortunately it went really bad for me. Already to the first control I lost more then 40 second on my route choice. After half the course I collapsed physical, and lost several second on each leg the rest of the course. I lost also 15 – 20 seconds to both the 9th control, where I thought I could pass between the houses (where it was private area), and to 11th control, where I started running to the 14th and 15th control. When I finished I was in 17th position, almost 2 min behind Olav Lundanes.

After the races I felt worse physically and my throat got sour again, so it was clearly I had not recovered well enough after being sick. So I had to skip also Sundays Middle distance, and it was though enough for me to travel home that day. Today I finally feel a lot better, and I did some easy running this evening.
Posted by Øystein Kvaal Østerbø at 21:59 No comments: