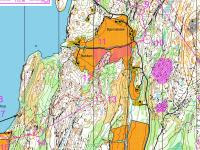 Last weekend the first round of the Norwegian Cup was arranged in Østfold. I have already been writing about Fridays Sprint in Askim, that I was able to win.

Saturday a Middle distance was held in Moss. I did a OK performance, but lost some seconds to the 7th, 13th and 14th control. In total a bit more then one minute. During my morning run I hit a rootstock with my right knee, but it was OK to run the race, even if the knee was quite stiff. My result was a 8th place, 1.42 behind Hans Gunnar Omdal. Results, splits and GPS tracking 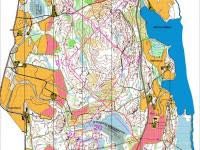 Sunday it was a Chasing start, based on the results from the Middle distance. I got a good start, but out of the 4th control some runners starting within a minute behind me got contact. My knee hurt more today, and I got stiff in both my right leg, thigh and hip, and had problems to keep the same speed as the other runners. But they did some mistakes, and several time I managed to get up in the front of the group again.

When we passed the arena I was last, and decided I had to do something, because it was not any point keeping that position. My knee also felt better, and when the other runners started looking tired or doing smaller mistakes I took the command, and was able to stay in front of the group the last part of the course. I finished in 5th position, 4 min behind the first group won by Emil Wingstedt. Results, splits and GPS tracking

In the Norwegian Cup I am in 2nd position, behind Eskil Kinneberg. Mari Fasting is leading the women's class after victory all 3 days.
Posted by Øystein Kvaal Østerbø at 21:58