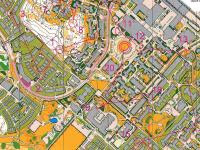 The coming days the Norwegian WOC selection races will be arranged close to Oslo. It starts with a Long distance on Ringerike today. You can follow the race through the live center, with online results, speaker sound and GPS tracking from 16.15 today.

Unfortunately I am not able to run today. Sunday I waked up with a sour throat, and skipped the planed long run. Monday and Tuesday I felt worse, and spent most of the time in my bed. So I skipped my planed flight to Oslo yesterday and stayed home. Today I feel better, but I am still not able to train. Hopefully I will feel fine tomorrow, so I can fly to Oslo and participate in Saturday's Norwegian Championship (NM) in Sprint and Sunday WOC selection race in Middle distance. Also these races can be followed live.

NM sprint is the national highlight of the year for me, and I really hope I will be able to try to defend my victories from the three last years and qualify for WOC team.

Before I got sick the training went well for me last week. Wednesday I was running the first stage of Stockholm City Cup. It was a nice area for a sprint and a good course. I was satisfied with my race, without any bigger mistakes, and finished on 2nd place, 19 sec behind the EOC winner Jonas Leandersson. I lost a few seconds on my route choice to the 10th, 15th and 20th control. You can see the map above.
Posted by Øystein Kvaal Østerbø at 15:48 No comments:

Summary of EOC in Dalarna 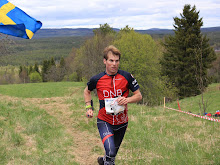 The European Championship in Dalarna in Sweden two weeks ago was not any success for me. The qualification races went OK, and I qualified to both the Long and Sprint finals after stable performances. 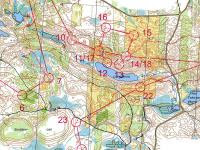 The Long Final was held in Skattungbyn north of Mora. I did a technical stable performance, with no really mistakes, except 40 sec to the 7th control. But unfortunately my shape was not good, and I was probably not physical prepared for the hilly terrain with soft and stony ground. This was my first long distance competition this season, because I was both sick and dislocated my shoulder in April. My result was a 34th place, 11 min behind Olav Lundanes. 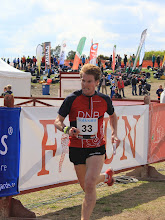 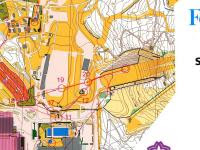 The Sprint Final was held the following day from Lugnet ski stadium in Falun. Also this time I did an OK race, without any big mistakes. But I lost a few seconds on most of the legs, and finished as 16th runner, 53 sec behind Jonas Leandersson. My shape was obviously not as good as I had hoped before EOC, and afterwards it easy to say that I should have skipped the Long distance. But I was probably also to defensive in my orienteering, and used too much time planning the coming route choices, instead of just run fast where it was possible. 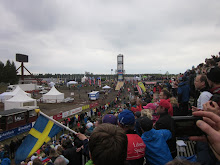 EOC in Dalarna was anyway a great experience with good competitions, a lot for spectators and great TV productions. The Norwegian team did well, especially Olav Lundanes who won both the Middle and Long distance. My club mate Fredrik Johansson did an excellent leg when the Swedish second team won a silver medal in the relay. A really sad ting happened also in the relay, when Daniel Hubmann got seriously injured, and is out for the rest of the season. It’s really sad, especially since WOC is held in Switzerland this summer. My thoughts go to Daniel, and I hope he will recover well and come back stronger than ever.

I have uploded many of my 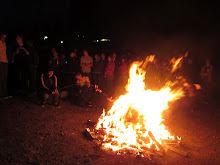 Picures from EOC. Most of them are from the celebration of the Norwegian National Day, the Relay and the Banquet.
Posted by Øystein Kvaal Østerbø at 19:55 No comments:

Ready for EOC in Dalarna 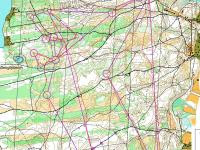 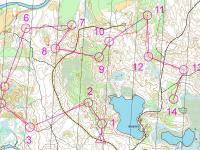 I have had some problems with both being sick and a dislocated shoulder this spring, but the training have been going well the last weeks and I got a good feedback on 10mila last weekend. I feel also well prepared technically after being in Dalarna three times last year, and some good training sessions the previous days. To the left you can see the map with my routes from today’s Model Event, held in the neighbour terrain to the Long Final. 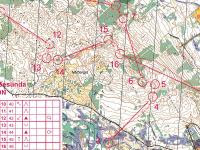 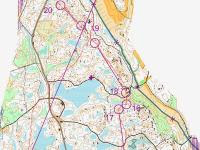 Last weekend I was competing in the big 10mila relay, that this year was held close to Borensberg, 2 hours drive south west of Stockholm. IFK Lidingö had a strong team, and we felt well prepared after two training camps in the area. I was selected to run the 8th leg; 13,5 km in daylight.

I had only been running a few sessions in forest since I dislocated my shoulder in the Norwegian Night Champs 2 weeks earlier, but had been training well physically and was very focuses on doing a good performance. My shoulder had also been fine, and I was again feeling safe when I was running in the forest. 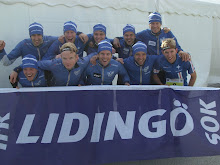 The boys in my team did a great job, and we were among the leading teams through the night. I started out as 8th runners, with a gap up to several teams 3 – 5 min in front of me. I did a stable race, without any bigger mistakes, and was satisfied I managed to follow my tactic with running close to the line. The only runner I saw on my leg was NTNUI that I passed after 1/3 of the course.

The team continued to run well, and we finished 6th after an impressive last leg by Fredrik Johansson. (He was only beaten by Thierry Gueorgiou and Olav Lundanes, with less than one minute.) Also the girls did a good relay and finished 6th, with a almost new team compared to the teams that came 1st and 2nd the two previous years. Results and GPS tracking

On ifklidingo.se you can read each runners comments from their own leg.
Posted by Øystein Kvaal Østerbø at 21:50 No comments: