9th in 10mila with IFK Lidingö 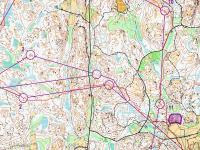 This weekend the tradition 10mila relay have been arranged from Kungsängen north-west of Stockholm. My club IFK Lidingö had a strong team this year, and I was really looking forward to run the 9th leg. Our women's team had also set a high standard coming 6th and 13th with their two best teams.

The relay started really well for us and we where top 3 after both the 1st and 2nd leg. Unfortunately our 3rd leg runner did two big mistakes, and changed over more than 10 min behind the lead. That made it a challenging situation for our runner on the Long night, but he did a good race without loosing too much time to the leading group lead by Kratov and Boström. Our 5th leg runner started well picking some seconds on the lead, but also he did a bigger mistake. After that all our runners did great performances (having top 10 leg times), and I was sent out on the 9th leg as 13th runner.

I did a stable performance, following my tactic that was to run close to the line, follow my compass, read on the bigger hills, and be very accurate the last part to the control points. When I changed over I had advanced to a 10th place, having the 3rd best time on my leg. The terraing was very nice, and it was a pleasure to run, (at least in day light). GPS tracking from the 9th leg.

Fredrik Johansson did a good last leg for our team, even if he had a bigger mistake, and could finish as 9th runner. Kalevan Rasti won in front of Halden and IFK Göteborg. On overall I think it was a very well arranged 10mila, with high quality on both maps, courses, arena and the web TV. Results and GPS tracking

The feelings in my team was a bit mixed afterwards. All runners was performing well most of their legs, and a 9th place is quite good. But we had a good chance to take a top position, and the few mistakes we did was too big and very crucial, since the gap to the leading group became huge after the Long night. The runners who did mistakes are normally very stable in night orienteering, but when you did a mistake in the flat and diffuse terrain it was very challenging to relocate. We run together as a team, and next time I can be the one loosing time, and I know my team mates still will do their best for the team and support me. On the last half of the relay we where one of the teams having the fastest time, and I hope we will come back even stronger in Jukola next month.
Posted by Øystein Kvaal Østerbø at 15:59