This morning the WOC Sprint Qualification was held in the University area in Lausanne. We knew it some places was several levels and complex buildings, and expected the course to be quite tricky.

I tried to run as I use to do in qualification races, picking safe and easy route choices, and running fast without pushing maximum. When I finish I knew I could have lost a few seconds of some of my route choices, and that is was possible to run a bit faster, but thought still my race was good enough to qualify for the afternoons final.

My result ended up being a 16th place, one second from qualifying to the final, and 43 seconds behind the winner Frederic Tranchand. Afterwards it easy to see that the course was not as difficult as we had expected, and that it is runners from many different nations who are good in this type of sprint. Is really tight around me on the result list, and by running 15 seconds faster I would have been number 7. I did not do any big mistakes, but lost 5 - 10 seconds to control number 51, 62 and 64. Results and splits in the live centre.

This is the first time since my WOC debut 8 years ago I will miss a Sprint Final, and I am of course very disappointed. As I wrote some days ago I was sick for 3 weeks in the beginning of June, but the last weeks my shape has become much better, and I felt finally prepared to fight for a good position in the final.

Now I will soon go cheering for my team mates in the final, that we be arranges from 16.00 - 18.15 tonight. The race can be followed live on Norwegian television (NRK2) and on the WOC live centre.

WOC preparations in Switzerland and Trondheim

I have not been writing anything on this page for more than one month, and that is mainly because I was sick for several weeks in June, and it's not too motivating to write news when things are not going as you have planed. But the last weeks my training has worked well, and I now feel ready to run the World Champs sprint in Lausanne on Saturday. 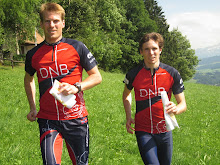 In the end of May I got sick for one week in front of the Norwegian WOC selection races. I had to skip the long distance, was running the Norwegian Championship in Sprint without any success, then got worse again and also had to skip the middle distance. Anyway I was selected to run the WOC sprint and the WC in Switzerland. 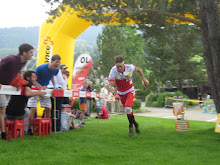 The following week my shape was very up and down. I rested for some days before I felt fine and started with easy training. Then I felt worse, and took some more resting days before I started to train again. In the weekend I got really sour throat, and had to take several more days without running. To not risk being sick even longer I skipped the big Jukola relay, and started with very easy training when my team mates in Lidingö traveled to Finland.

After being more or less sick for 3 weeks I could finally start to train normal again in the beginning of the same week as the World Cup was arranged in Switzerland. It was decided that I skipped Saturdays middle distance, and was only running Sundays sprint. The days before the race I got some nice sprint trainings.

The World Cup sprint was held in the historical center of St. Gallen. It went OK in the beginning, but I started to feel really tired already in the big climb to the 5th control. To the 6th control I ran on the wrong side of an impassable wall, had to turn, and lost 30 seconds. The rest of the course I lost some seconds on each leg, without doing any mistakes. Maybe not so strange since this was my first hard session for more than 3 weeks. My result was a disappointing 31st place.

After the WC we stayed 4 days in Lausanne, and I got several good sprint trainings in the area. Even if I trained hard I felt better physical for each day, and also technical I got a good flow in my orienteering. 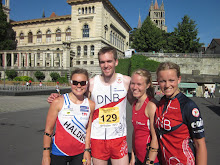 After the training camp in Switzerland I went to Trondheim for almost 2 weeks to visit family and friends and to do the last preparation for the World Champs. Last week I trained a interval block, with 9 hard sessions in 7 days. It was really though, and I was not feeling to well on all sessions, but the last days I felt strong and I got a good feedback on the last track session. 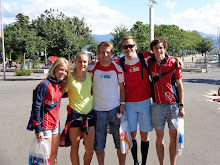 Tuesday I travelled back to Switzerland, and yesterday I trained my last hard session with sprint orienteering intervals in Lausanne. Now the training job is done, and I can just relax and prepare mentally for the WOC sprint in Lausanne on Saturday. The qualification will 9.00 - 11.00 and the final 16.00 - 18.15, and you can follow the final live on Norwegian television (NRK2) and on the WOC live centre. My picture gallery from WOC will be updated during the championship.