The last four days I have spent with parts of the Norwegian National Team on a Sprint Orienteering Training Camp in Evora in Portugal. Evora is a great place for sprint orienteering, and in the area there are several small cities similar to Chambry in France where the WOC Final will be held in August. 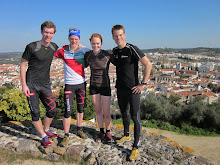 We have so far been running 4 sprint sessions with different formats in competition speed, 2 sprints in moderate speed and 2 easier sessions in forest with moments like control picking, corridor and contours. After the trainings we have been relaxing in the pool, jacuzzi and sauna on the hotel. Tomorrow morning we will have a last session in Evora city before we are flying home.
Posted by Øystein Kvaal Østerbø at 23:49 No comments:

After Tour de Ski China my one month long January trip continued to Australia, where I stayed for two weeks. During this time I visited Melbourne, Falls Creek, Canberra, Ulladulla and Huskisson on the coast, the Blue Mountains and finally Sydney.

During the trip I was able to see many nice places and exciting animals like koalas, penguins, kangaroos and wallabies. I am thankful to my Australian friends that were helpful with good advices and accommodation.

It was really nice to change the cold Scandinavian winter with summer and perfect conditions for running training. In Sydney I was also able to participate in a local sprint orienteering race. I had a great time in the small part of Australia I visited, and hope I will be able to come back soon to discover more of the huge country.
Posted by Øystein Kvaal Østerbø at 21:31 No comments:

In January I was on my longest trip so far in my life, both in time and distance. It started with one week in China, continued with two weeks in Australia, and ended with one and a half week in New Zealand. I will now write a few words and present pictures from China, and will hopefully have time to continue with Australia and New Zealand later.

Just after Christmas I travelled to Beijing to compete in Tour de Ski China in cross country skiing. You can read more about why I travelled to such a competition in the first news I made for my new blog.

I looked at the trip as a new challenges and great experiences, since I hadn’t done any special preparation for the cross country skiing season. The races went as I could expect, and I came around number 30 in all of the four competitions. Results

Xiwuqi in Inner Mongolia was a totally new place for me, really cold and not the most exciting place I have been, but the races was good. The sprint in Beijing was held in the Olympic Stadium the Bird Nest, which was a great venue for such a race. Tour de Ski China was ended with the 50 km long Vasaloppet China in Changchung.

The week in China was great, with several tough competitions and a lot of fun. I meet many new people from different countries and came to some new places in different parts of the huge country.
Posted by Øystein Kvaal Østerbø at 23:16 No comments: