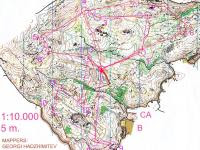 Last week I was in Antalya in Turkey on my first training camp with my new club IFK Lidingö. This was my first time in Turkey, and the total impression of orienteering in Turkey was really positive.

The first four days we were training in area around the big city Antalya. The maps were mainly good, and the terrains variables from stony detailed terrains to areas with great runability.

There where at least 50 orienteers on training camp in Antalya, and we got competition from Bækkelaget, Turun Metsänkävijät and some other Finish and Russian runners on the two relay trainings we were running.

The two last days we were driving one hour east to the holiday village Side, where we were running the first two days of Antalya O-days.

In the Middle distance I was running in moderate speed since it has been a tough training camp, and I came 6 minutes behind Valentin Novikov, who won in front of my team mates Jonn Are Myhren and Klaus Schgaguler. 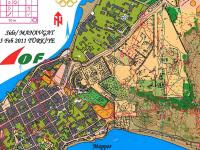 The Sprint was held in a mix of sand dunes, ruins and an old city centre. I was satisfied with my performance, except a 30 sec mistake to the 10th control, and came 4th, 23 seconds behind Tue Lassen.

The maps for the competitions were unfortunately not as good as during the trainings, and were partly the reason several runners did mistakes.

It was nice to be able to know my 15 of my new team mates from IFK Lidingö better during the week in Turkey, and my impression of the club is really good. It is a great atmosphere, and several runners are training very well. After I came home from Turkey I have stayed on Lidingö this week, where I have done a lot of good training and got more info about my new work.

In my DOMA you can find maps from some of the trainings and all races with my route choices.
Posted by Øystein Kvaal Østerbø at 13:43