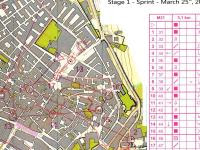 Last weekend I continued the trip on Sicily by competing in the Mediterranean Orienteering Championship south east on the island. Two sprint races and one middle distance were counting in the overall competition, and Gabriele Viale and his team organized again a great event in the south of Italy.

In my new Digital Orienteering Map Archive you can find most of my maps with route choices, and in my picture gallery a lot of pictures from the whole week on Sicily.

The first race was a sprint in the historical centre of Sciacca, witch is relevant for the WOC Final in Chambery. I did a good race, without any mistakes, and won in front of Audun Weltzien and Daniel Hubmann. 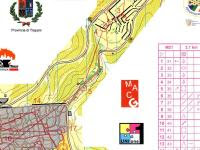 The second race was a sprint in the previous city Gibellina, that was totally damaged by an earthquake in 1968. Parts of the old city had been build up, and formed now a labyrinth we entered two times during the course. Audun Weltzien did a good race and won in front of Jerker Lysell. Daniel Hubmann was unfortunately disqualified because of a miss punch, and out of the overall competition. 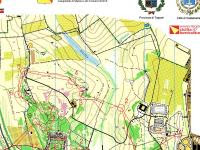 The third and last race was a middle distance in the coast city Selinunte, and parts of the course was in some archaeologically ruins. I lost in total 3 minutes in the green area around the 7th and 8th control, and finished on a 3rd place. Audun Weltzien won both the last race and MOC overall clearly, while Annika Billstam won the women’s class overall.