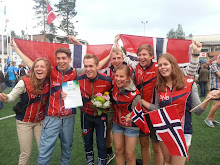 Last week the World Orienteering Championship was arranged in Vuokatti in Finland. I was selected to run the Sprint, and was also one of the candidates for the Relay team.

My training had gone well during the winter and spring, my shape had improved during the last month, and I had showed up some good results in June with a 2nd place in the World Cup sprint in Sigtuna and a 8th place overall in the Nordic Tour. I had therefore high ambitions, and hoped to finally be able to win a medal in my 10th WOC.

The Sprint Qualification was held in a holiday village with a lot of open park land. Last year in Lausanne I was one second from qualifying to the final, after doing an OK performance and being 43 sec behind the winner in my heat. Then I had been sick several weeks in the spring, and I know my shape was much better now. But still it's a lot of runners who can do well in a quite easy qualification course, and I would not do the same mistake this year. I wanted also to use the qualification race to perform in the same way as I had planed to to in the afternoons final.

The qualification course showed also this year out to be quite easy, and I could run quite straight on most of the legs. But it was a lot of hedges and other vegetation, all the houses looked the same, and it was also a few route choices that needed to be planed, so I still had to be really foucues the whole course. My running felt very easy, and in the end of the course I wondered if I should push harder.

Afterward I think I did a really solid qualification race, where I had a good plan for all legs and was running in a stable pace with good flow and no hesitation. I was surprised I was able to win the heat 2 with as much as 25 seconds, but that gave me a good feedback before the afternoons final! Results, splits and GPS tracking.

The Final was held from the baseball stadium in Sotkamo, and it was a lot of spectators and a great atmosphere, simular to Trondheim 2010. The organizers had also used a lot for additional impassable fences that made to orienteering much more tricky.

I started as I had planed, but did not get the best flow in the first part of the course, and had problems picking my route choices with all the fences on the map. The last part of the course went better, and I was able to run more offensive. I managed to find good routes of most legs, but in total I lost aprox. 5 seconds 5 places because of hesitation or not taking the optimal route. 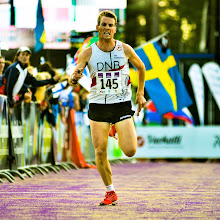 My result was a 7th place, 29 sec behind Mårten Boström, who did an impressively good performance. To the silver, won by Scott Fraser, it was 13 sec. I had hoped for a medal, and was a bit disappointed afterwards, since I have finished between 4th and 8th position several times before. But it's a lot of runners who aim for a top position, and I did quite well. In overall I'm quite satisfied with my performance, since I found the course very challenging, and I avoided any big mistakes. All the runners winning medals are good friends of me, and I visited Mårten one week when he worked on Zanzibar last winter. Results, splits and GPS tracking.

Before the WOC I know I was a candidate for the Relay team, but had not expected to be choose, since I hoped the runners doing the individual forest races should do well and have an advantage. Anyway I prepared as good as possible after the sprint, and had some good trainings in relevant terrain where I got a good feeling.

When I after the Midlde final was told that I was selected to run the 1st leg for the Norwegian team I felt it like an honor, and got quite excited, but also felt some pressure, since we had finished 2nd in the WOC relay the 3 last years, and had ambitions to fight for the victory.

To both the 1st and 3rd controls I lost a few seconds since I was not running optimal routes. I had the longest forking in the beginning, and at the 3rd control I was nr 16, 33 sec behind Switzerland. But I could see a lot of good runners in front of me, and was not stressed.

On the long leg I thought running to the right could be a good option, using the paths to avoid the green. But I didn't want to run alone, and followed all the others who went straight. On the end of the leg the runners I could see in front of me went too much to the left (to go to the other forkings), and Ukraine and I was the only runners who continued straight to my forking. At the 5th control I was nr 13, 48 sec behind Switzerland. 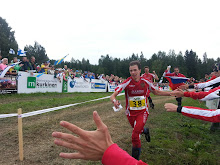 The rest of the course went really well, and I managed to pass a lot of teams (which had other forkings or did mistakes). At the next radio (7/8 on the map) I was 5th, and when I finished I was 2nd, 3 sec behind Switzerland, and with a 30 sec gap to the following teams. Results, my splits and GPS tracking.

Carl Kaas on our second lag did well in the beginning, and was alone in the lead on the first radio. But unfortunately he did not find the best route on the long leg, and did also some mistakes in the end of the leg. Magen Dæhli on our last leg did also some mistakes in the beginning and had problems on the long leg, but after a strong finish he came in as 6th team, 3 min behind Russia, and 2 min from a medal. 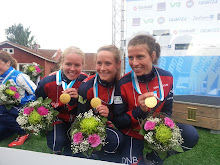 It was more forking then expected, and a surprisingly thigh relay. We did not run as good as we had planed as a team, and got the position we deserved. The Norwegian team did not win any individual medals for the first time in many years. But the spirit was still good in the team, and we got a perfect end of the championship since our girls team won the relay after running 3 really sold legs, exactly as you should do in a relay:-)

In my Picasa album you can find more than 300 pictures from the whole WOC week in Vuokatti.
Posted by Øystein Kvaal Østerbø at 13:48