On my way to World Games in Colombia

The coming weekend I'm going to compete in World Games in Cali in Colombia. World Games is a huge event with in total 4500 participants from 101 different nations competing in 31 different sports. It’s a sort of Olympic Games for Non Olympic Sports.

Together with the World Champs held in Finland some weeks ago World Games is the highlight of the season, and something I have been looking forward to for a long time. Since it's only arrange every 4th year, and that orienteering is part of such an huge event, I find it very special. 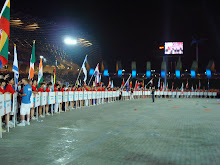 The program is as following:
Jakter medalje i Colombia, orientering.no

I have competed in World Games two times earlier, and it was a great experience both times.

World Games 2005 was held in Duisburg in Germany. It went really well for me and I finished 3rd in the Middle distance, beaten by Thierry Gueorgiou and Daniel Hubmann. In the relay I finished first on the first leg.

On my old homepage you can read more and find links to all the maps. As you can se on the pictures we were also on the Opening Ceremony and watching some other sports.

World Games 2009 was arranged in Kaohsiung in Taiwan. The Opening Ceremony was held in the new stadium build for the event, with a capacity of 55,000 people, and involved 4,000 performers

In the Sprint I got a 4th place, in the Middle distance I came 6th, and in the Relay I won a bronze medal together with Lars Skjeset, Mari Fasting and Elise Egseth (which also won bronze in the sprint).

On my old homepage you can find news with maps from the Sprint, Middle and Relay. Last week I also finally managed to upload my pictures from WG 2009 to Picasa.

At the moment I'm in Miami, where I have a one and a half day stop on my way to Colombia. I will try to update my blog with short reports from the races the coming weekend.
Posted by Øystein Kvaal Østerbø at 04:29