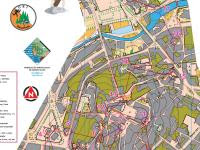 The last four days I have competed in Portugal O-Meeting close to Viseu in the north in Portugal.

Saturday it started with two races in one day. The first was a Long distance race held in the morning, which I was running at easy speed. The terrain was hilly and partly very stony.

In the evening the first highlight of POM was arranged, with a Night sprint in the old city of Viseu, which was a perfect place for a sprint. The race went well, but I hesitated a few seconds some places to avoid doing mistakes. My result was a shared 2nd place with Mathias Merz. Severin Howald did an impressive race, and won clearly.

Sunday it was a Middel distance race I was running in easy to moderate speed. In the evening we did corridor training. 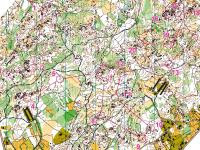 Monday was the other highlight of POM, a Middle distance World Ranking Event. The terrain had a lot of small rock details, and partly dense vegetation, which made it quite tricky. I was quite tired physically, but it went OK technically until the 12th control. When I passed the arena I had the chance to get a top 10 position, but I missed the 19th control with 3 minutes, and did also some other mistakes.

Today POM was ended with a Long distance chasing start. I ran the course in easy speed. The terrain was not as nice as yesterday, and the green was really bad. It was difficult to read from the map where you could run or not. I lost much time several places. Thierry and Simone won POM overall. 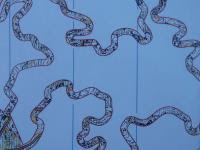 You can find maps from all the races in my Digital Orienteering Map Archive.

Tomorrow we are driving one hour west, to the coast, where we will train in pine forest and sand dunes. It will be a nice change from the stony terrain we have met on POM the last days. It is really nice to be on training camp together with as much as 20 other runners from my club IFK Lidingö, and we are having great fun together.
Posted by Øystein Kvaal Østerbø at 23:39