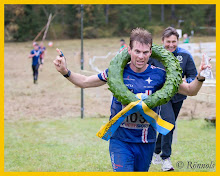 Last weekend I participated in the Swedish Championship in Ultra Long distance. It was held in Skogstibble west of Uppsala, and it was a 24 km long course with Mass start. It was held at the same weekend as the World Cup Final in Switzerland, so some of the best Swedes where unfortunately not running. I had originally hoped to run the WC, and especially the Sprint final, but because of the economical situation Norway was only sending 3 men and 3 women, and I was not good enough this year. But SM Ultra was a nice replacement for the WC, and a totally different sort of challenge.

I had expected it to be several forked loops, like in Blodslitet. But from the control codes it seemed to be no forking until the butterfly. Most runners was together on a long line until we had past the road half way to the 3rd control. Between the road and the 3rd control the runners started to spred out, and I got stuck in a lot of fallen trees and was suddenly alone. Got a bit stressed, but continued following the compass in the right direction, and saw the open area to the right before the control. When I was entering the control circle I met the leading runners, and understood I was approx 30 seconds behind them. (A lot of runners missed several minutes on this control, and was already then out of the match for the victory.)

To the 4th control I managed to catch the leading group (who ran too much to the right, and missed the path through the green), and I punched the butterfly control first. Had the same forking as Karl Walheim and Joakim Svensk on all loops. We lost some time to the 5th and 8th control, and when we entered the butterfly control the last time we meet the leading guys who had just left the butterfly, and at the control we also meet some other guys. At the 14th control we where together again, and we where now a group of 8 runners who stayed together most of the rest of the race.

To the 16th control we split up, and together with some others I came to much to the left and punched the control 20 - 30 sec after the first runners. But we got contact on the following leg, and where together at the map change.

The 8 runner group stay together the whole second loop, that was pretty short. We did a small mistake to the 22nd control. The speed was OK, but not very high. This loop had nice runability, compared to most of the other terrain, where it was stony and partly very dense vegetation.

On the last longer loop I understood that it would not be any more forking, and I was a bit disappointed how they managed to make a 24 km long course with 3 loops, without having more forking then a butterfly on the first loop. The speed increased a bit, and I was mainly in the last half of the group. Was not struggling, but didn't feel for running faster either, and the leading guys did a good job, except a mistake to the 30th control.

To the 36th control the others was insecure, and I got the control first. Was leading the group on the following leg, but got stuck in a really stony area, lost the direction, got insecure, and some other took over the lead again.

To the 38th control I thought is was the right time to get a better position before the finish, and I passed some of the others on the open area. The rest of the course had not so stony ground, and I felt OK physical. To the 39th control I took over the lead, but Joakim Svensk passed me just before the control and I thought 2nd position was good enough before the sprint. To the 2nd last control Joakim ran to much to the right, I got the control first, and already then I felt pretty sure to win the race. To the last control I just followed the compass to the field, and I didn't need to sprint in the run in, and could win 4 seconds in front of Martin Regborn. Results and splits

Cool to win my Swedish Champion titel, even if I was just following other runners big parts of the race. But in a mass start doing the right moves on the right times is a big part of the game, and I succeeded this time. That my club mate Anna Bachman won the women's race made it a perfect day for IFK Lidingö!
Posted by Øystein Kvaal Østerbø at 13:58