This weekend my Norwegian club Wing OK arranged the Norwegian Championships in Sprint and Sprint Relay in Trondheim.

My preparations was unfortunately not the best, since I got sick when I came home from a WOC training camp in Italy one and half week ago. After feeling worse last weekend I went to the doctor and took different tests, and Monday I started with antibiotics. I got better pretty fast, and Wednesday I could start with easy training again, after one week without training.

I had to skip the Middle and Long selection race for World Cup witch was held on Wednesday and Thursday. But that didn't matter too much, since I anyway had planed to skip the World Cup on Kongsberg, because my focus will be on Sprint and Relay until WOC. 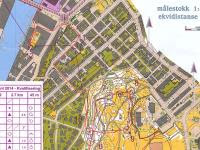 But now back to the Sprint Champs. The qualification Saturday morning was held partly on Kristiansten Festning, which was also used for WOC 2010. I did a good race, with safe and controlled orienteering, and got a shared 1st place in my heat. Results and splits. - Kontrollert kvalifiseringsløp, orientering.no 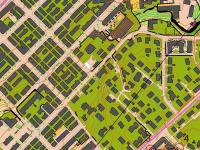 The final in the afternoon was held partly in a new sprint area, with the finish at Solsiden in the city centre. I did a mainly good race, that was destroyed by two big mistakes.

In the beginning of the course I tried to get an overview and decide as many routes as possible. I was maybe too focused on the coming legs, because after the 2nd control I started to read the map on the leg to the 4th control, and didn't understand a thing when it was no opening in the house I wanted to pass through. I got confused when I stopped and looked around, and I also thought I had punched the wrong 3rd control, since mine should have been on a wall, and not a flowerbed. I was running back to the previous control, and than I understood that it was my 2nd control, and I had to continue to the 3rd control. This mistake cost me 20 sec.

It felt like I had lost 20 - 30 sec, and I hoped it was still possible to win the race, or at least get a good position, if I was running fast and error free the rest of the course. After the mistake I was running quite aggressive, and had a good flow from the 3rd to the 11th control.

The other mistake was to the 12th control, where I didn't see the wall closing the opening between the buildings. When I was not able to enter through the building I ran left, and lost 10 sec compared to the right route.

The rest of the race was OK. I took the best routes, but was quite tired after running fast in the middle part of the course, and lost a few seconds to the fastest runners.

My result is a shared 6th place, 16 seconds behind the winner Nicholas Oskarsson. It's good to see that it's severals Norwegian who is running well in sprint, and that I can't do big mistakes like today if I want to get a top position. Gøril Rønning Sund won the women's class. Results and splits. Oskarsson overrasket med NM-gull, orientering.no 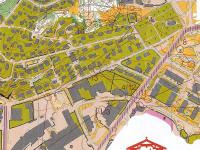 Sunday the Norwegian Champs in Sprint Relay was arranged for the first time. I was running the 2nd leg for Wing, who unfortunately didn't have a good enough team to fight for a top position. My performance was not the best either, and I was both feeling very tired and did some mistakes. Halden won after a tight fight with Frol. Results. Fasting avgjorde NM-sprintstafett, orientering.no

Even if my performances was not as good as I had hoped it was a nice orienteering weekend in Trondheim, and I would like to thank all members in Wing for a well organized event. Live center with results and GPS tracking from all races. The organizer's picture gallery from the Sprint and the Sprint relay.
Posted by Øystein Kvaal Østerbø at 23:48