World Games in Cali - Thoughts about terrains and general impressions 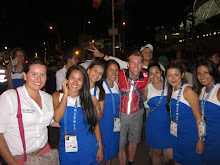 Yesterday I was writing about the World Games races held in Cali in Colombia the first week of August. The races was not the success I had hoped for, but World Games was still a great memory for me. Today I will start with some thoughts about the maps/terrains and than continue with some general impressions from the whole World Games in Cali.

I have seen some people complaining about the courses in World Games, and also other international events held the previous years. The main goal with an international event is not necessarily to serve the runners as difficult courses as possible in a nice untouched forest, but to show up the sport. 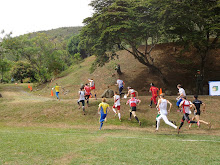 It's also very individual what type of terrain different runners prefer. Runners who only prefer to run in a specific type of terrain can stay home, or go to smaller races in terrains they like. But as an elite runner on international level you should be able to handle all type of terrains. I can admit that the terrains used for World Games was not the most interesting, but it was probably the best you could find in Cali, and it was still challenging and you needed to run fast, make good route choices and avoid doing mistakes. 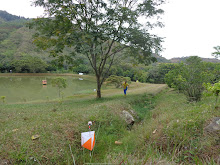 If we want orienteering to be a global sport we can't have all big events in for example Scandinavian forest. Someone will always think a course is too easy or too difficult, too long or too short, or the the terrain has too good runnability or are too bushy or stony. But if we want orienteering to grow as a sport we have to think positive and see opportunities, and not just complain about all that we don't like. 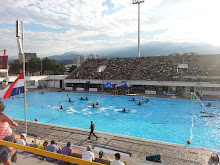 During World Games we where also able to watch some of the other sports, such as trampoline and acrobatic gymnastics, canoe polo, rugby, korfball and beach handball.

We were eating most meals in a big tent where they served food for all athletes, and it was cool to watch the different type of  body the athletes in different sports had. 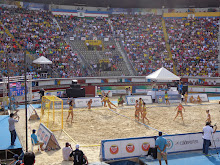 Norway won bronze medal in the women's beach handball, and we were able to watch the finals together with them. Brazil won not surprisingly for both men and women. 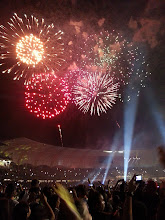 Even if the orienteering competitions was the most imported of World Games, the closing ceremony is my best memory from Cali. 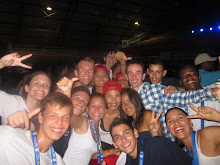 It started with that all the athletes entered the big stadium with a capacity of 50.000 spectators, and after some speeched is became a great party, with a combination of performances by some of the biggest artists in Colombia, among them Carlos Vives, and dancing. 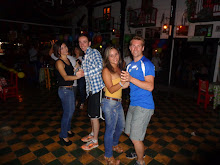 After the 3 hours long closing ceremony, we were some athletes who manged to enter the party for the 3500 volunteers, before we continued to a salsa club. The locals was very friendly the whole week, and glad to try to teach us salsa and other Latin American dances.

After World Games I stayed one week longer in Colombia on holiday, and I will write some word about that later.
Posted by Øystein Kvaal Østerbø at 00:05