2nd in World Cup Knock out sprint in Stockholm 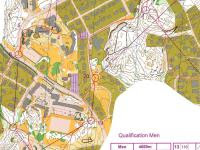 Last week the Nordic Orienteering Tour was arranged with in total 5 World Cup races in Norway, Sweden and Finland. I will write a summary from the whole tour later, but will start with the Knock out sprint in Stockholm, where I did my best performance with a 2nd place.

The individual qualification in the morning went well. At the prewarning I was 6th, but after loosing some seconds in the end I finished in a 13th position. Results and splits. 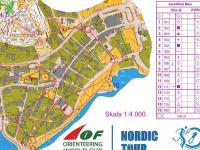 My heat in the Semifinal was really strong, and knew I needed to to a strong performance to be one of the two runners who was automatically qualified for the final, but that it was also was a good chance that the 3rd and 4th runner would qualify as "lucky looser". In the forked butterfly in the beginning I took the lead in my group. IN the end of the butterfly Gustav Bergman passed me, and I decided to stay behind him since he was running well. Me and Jerker Lysell changes about having the 2nd and 3rd position, while the Swiss runners Fabian Hertner and Matthias Kyburz was behind. To the 2nd last control I was the only one taking the right route choice, and I was speeding up and managed to take over the lead just in front of the other runners (as you can see on the picture above). On the run in I let Gustav Bergman pass me, since I anyway would qualify for the final. Results, splits and GPS tracking. 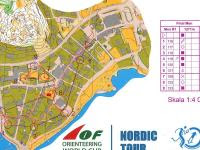 In the Final I wanted to use the same tactic. Vojtech Kral took the command to the 2nd control, and I stayed behind him in 2nd position. Surprisingly the strong Swiss runners was again behind. To the 6th control I took over the lead, and found it was a good position to have during the forked part (with map exchange), since I then would not be distracted about where the others was running. I ran well, and was still in the lead. To the 12th control two other runners took the left route choice, and managed to catch 2 second to me, but I kept my lead. In the end of the races I just tried to keep a stable high speed, and run perfect technically so I could continue to stay in the front. It went well, but in the run in Fabian Hertner managed to pass with a few meters. It's a bit annoying to be so close to a World Cup victory, but I was really satisfied with  my performance, and this was the first time I was top 3 in a WC race sine 2007. Results, splits and GPS tracking. 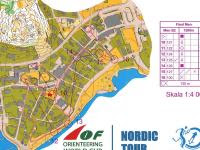 A great TV production from the Semifinal and Final can be watched on SVT play. On the NORT website you find a live page with links to result, GPS tracking and web TV from all races.
Posted by Øystein Kvaal Østerbø at 17:21