Last week I spent in Puglia in the South of Italy on a training camp with the Norwegian National Team. The first four days we participated in the MOC Sprint Camp organized by Janne Salmi and the last three days we ran the Mediterranean Orienteering Championship. It was a strong competition field on both the trainings and especially the MOC races since the whole Swiss Team and many other top runners were participating. 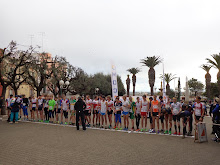 During the Sprint Camp we did in total 5 sprint trainings with high intensity and 3 easy trainings in forest. Wednesday we had a sprint championship similar day, with a Qual race in the morning and a Final in the afternoon. On the other sprint trainings we did several shorter loops.

The first MOC race was a Middle distance. I was not pushing maximum since it had been a though training camp and I did also some stupid mistakes.

The second race was a Long distance with mass start. I was feeling tired in the beginning, and lost contact with the leading runners already on the long leg to the 1st control. But after felling stronger in the last part of the course I was able to finish first in the second group.

The last race was a Sprint in the historical old city of Matera, that is seen on as one of the most tricky places for a sprint after the PWT race held there in 2002. I managed to do a stable race avoiding big mistakes, but lost time on some route choices and hesitation. My result was a 8th place, 1.24 behind Thierry Gueorgiou. I was running with a head cam, and have uploaded the video to youtube. 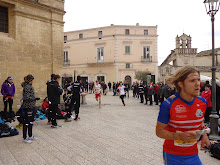 I have now uploaded maps from all the competitions and most of the trainings to my Digital Orienteering Map Archive and also made a picture gallery.

In total it was a really good training week in Italy. Even if I did not get any top results on the races I had mainly a good flow in my orienteering and felt quite well physical. The week included 8 intensive and 5 easy sessions, and I managed to run 15 hours (155 km) + 1 hour strength training.

Posted by Øystein Kvaal Østerbø at 00:05