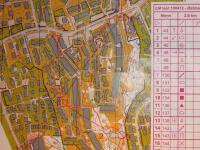 Tomorrow the Norwegian Championship in Night orienteering is held in Fredrikstad. You can follow the race live with GPS tracking, speaker sound and live results from 21.30. The men’s senior class is starting last, with mass start 22.20. On Sunday we have the last selection race for EOC, with a Long distance in Halden.
Posted by Øystein Kvaal Østerbø at 23:27