The weeks after WOC – back injury 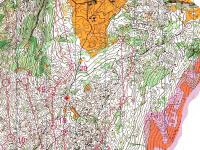 After the WOC Sprint in France I was watching my team mates running their races in the forest. On the resting day I was also running (part of) the spectator race held on the same map as the first part from the long distance. Unfortunately the results in the Championship were not as good as expected for the Norwegian team, even if we got some medals the two last days. But it was a really nice week in France, with great weather, as you can see on my pictures (I will publish on Wednesday). 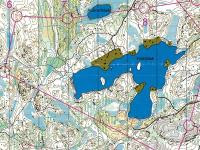 The week after WOC I felt tired, and I guess it was partly mentally, since the highlight of my orienteering season was over. The weekend I spent in Helsinki, celebrating a friends wedding. It was really cool be there together with a lot of happy people. I was also able to go training on the neighbour map to next years Jukola.

The last weeks I have had problems with my back, and it has not been any better. After the last hard session three days before the WOC sprint I felt some pain in my back, and it got stiff. I don’t think it influenced in my WOC performance, even if I felt it during the warm up and after the race. When I came home from WOC my back was even stiffer, and I was not able to run relaxed. I got treatment for it several times, and got less stiff, but could partly still feel some pain. 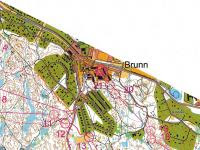 Yesterday I was running my first competition since WOC, when the District Championship in Relay for Stockholm was arranged in a really nice terrain in Värmdö. I was running the first leg for Lidingö’s second team. In the beginning my running went OK, but after some time I felt stiffer in my back. That made it also difficult to focus on the orienteering, and I did several smaller mistakes. To the changeover I was 3 minutes behind my club mate Fredrik Johansson, who had a big lead. I was however less time behind than I had expected after the bad feeling I had during the race, so my shape is probably not too bad, even if I felt like an old man when I was running. Järla won the relay after a strong last leg by Olle Boström.

After the race my back got very stiff. Today I have got treatment and it feels a bit better, but I can still feel some pain even when I am sitting and walking. At the moment I don’t think it is smart of me to run the Norwegian Championship in the end of this week, at least not Tuesday’s Long Distance. If I want to be totally recorded to the World Cup Final in Czech Republic and Switzerland the end of September it is probably best to take a period without running, before I start with easy training.

Norwegian World Cup Selection (The rest of the team will be selected after the Norwegian Champs.)
Posted by Øystein Kvaal Østerbø at 21:59