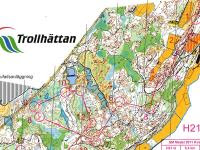 Last weekend I was participating in the Swedish Championship in Middle distance and Relay. The stiffness and pain I had felt in my back since WOC was much better, and I was again able to run quite relaxed.

In the Middle Qual on Friday was important to do a stable race, since only 6 runners from each of the 7 heats quailed for the Final. I did an OK performance, and avoided any big mistakes. My result was a 4th place, 1 minute behind Anton Östlin. The course was in a nice mix of different types of terrains. Results and splits

Already on Friday I felt a bit sore in my throat, and on Saturday it felt worse, so I decided to skip the Middle Final. It was a bit frustrating to be home while the others was running, but it was cool to watch the GPS tracking and that my club mates were running so well. Filip Dahlgren was in second position when he passed the arena as last starter, and had a good chance for the victory since Audun Weltzien and Peter Öberg did big mistakes to the 11th and 12th control. Unfortunately Filip also lost 4 minutes to the 11th control. Jonn Are Myhren lost some team in the begging of his race, but did a perfect last part, and ended up in second position, only one second behind the winner Erik Rost. This result was really nice for Jonn Are, since he has had a lot of problems with his health earlier in this season. Results 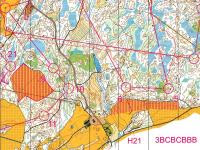 Sunday my throat was a bit better, and I decided to run the Relay, where I had been selected for the last leg in Lidingö’s second team. Unfortunately my shape was not as good as I had hoped, and I lost also quite much time on my routes to the first two controls. It was anyway a great day for Lidingö, since the women’s team won and the men’s first team finish 4th, less than a minute behind Rehns BK. Results
Posted by Øystein Kvaal Østerbø at 17:22