The last four days of 2012 I spent running the Auckland Pre-Oceania as preparation to the World Cup races held the coming week.

The first race was a sprint held in on Roskill Campus in Auckland. I did an OK performance, except a 15 seconds time loss to the 8th control, because I didn't see the control flag behind a wall. My result was a 4th place, 29 seconds behind William Lind.

The three last races were held in Woodhill Forest, North West of Auckland. In the first two of them I was running in easy speed as training, but in the last one I was pushing harder. I did an OK race, but had some smaller mistakes. My result was an 8th place, almost 4 minutes behind Olav Lundanes.

I have uploaded maps from all the pre races in my DOMA and pictures from my first week in New Zealand. 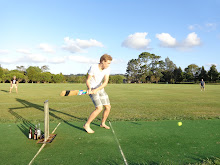 New Years Eve was celebrated with runners from New Zealand, Denmark and a few other countries playing cricket and barbecuing in Greg and Claire Flynn’s place North of Auckland.

The last days have unfortunately been far from how I had planed. At the first pre race in forest I got a thorn in my right thigh. That’s quite normal for an orienteering runner, and after the race I thought I was able to squeeze it out with my nails, and it felt fine the following day. 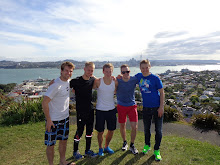 On the 1st January I felt some pain when I was running, and during the day I became more and more swallowed and red in the area around where I had got the thorn. With a needle I was able to take out another thorn, and in the evening I also started with penicillin after talking to the doctor of the Norwegian team.

The next morning it was even more swallowed, and I had problems to walk, so I went to a local doctor. She said I had got a serious infection, and opened the area where I had got the thorn, and was able to take out some more small thorn pieces. The last 3 days I have got drips with penicillin (intravenous) in addition to stronger tablets, and it will hopefully kill the infection. 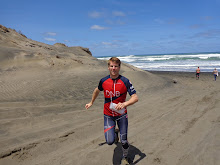 The infection is now less aggressive in the area where I got the thorn, but have spread to a bigger part of my thigh. Today I took ultrasound, and it looks like it’s not any more pieces of thorn left, so that’s good to know. I am still not able to walk, and will probably have to skip the first World Cup race on Sunday. So at the moment I am mainly lying in my bed waiting to get rid of the infection, so I can start running again.
Posted by Øystein Kvaal Østerbø at 06:48