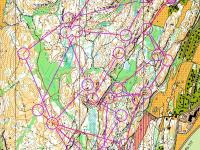 In the middle of October I was running traditional race Blodslitet in Fredrikstad. This year the Open Norwegian Championship in Ultralong distance was included in the 25 km long mass start race, with 3 forked loops in the beginning and a long common loop in the end.

I did some mistakes in the forked loop, and was running alone the last one and half short loop. On the long last loop I stared out 5 minutes behind Anders Nordberg, and 1-2 minutes behind a group of several good runners like Olav Lundanes and my club mates form Lidingö Filip Dahlgren and Fredrik Johansson. I stared quite offensive on the last loop, and held the same speed as the runners in front of me for a while. But after running a long time without seeing any other runners I started to loose some motivation. I was also really tired, since I have only been able to do a few runs longer than one hour since July because of the trouble I have had with my back. I finished as 12th runner, 13 minutes behind Nordberg who won with a big margin. Results, GPS tracing from the forked loops and the last loop
Posted by Øystein Kvaal Østerbø at 11:13