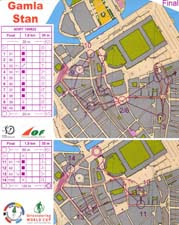 After the WOC training camp in France in beginning of July I went back to Stockholm and Lidingö, where I started my last training period to be in top shape for the World Championship. In that period I have been training less hours then earlier this year, but more and tougher sessions with high speed.

On Lidingö we have several good sprint maps, but the best training was probably in Gamla Stan, on the map from Nordic Tour last year. I guess this is the most relevant area for the WOC sprint you can find in Scandinavia, with a lot of narrow streets, like it is in Chambery. 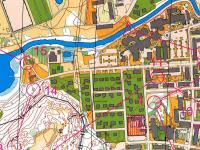 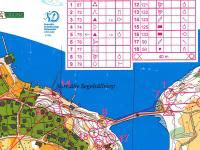 In the middle of July I was also running a nice two day sprint competition in Norrtälje called Skärgårdssprint. The first race was mostly in forest. I did no big mistakes, but lost some seconds on several legs and came 3rd, some seconds behind Josef Nordlund and Gustav Bergman. The second race was mainly in streets. I did a good performance, and was able to win both the race and overall in front of Gustav Bergman. Result from race 1, race 2 and overall
Posted by Øystein Kvaal Østerbø at 19:11