This long weekend three races in the Swedish Elitserien are arranged in Dalarna, as a pre EOC before next years European Championship.

The first race was yesterday, with a 20 km long mass start in Mora. The terrain was very nice, and made it possible to run really fast. Olav Lundanes showed again how strong is, and won clearly. After a strong finish I came on 5th place, 4 min behind Olav, and less then one minute from the second place. I was satisfied with my performance, and did only a few 15 seconds mistakes during the race. But in the middle part where I was running mainly alone I did not managed to keep fast enough speed, and on the long leg where I was running on paths to the left I lost almost one minute compared to the ones running straight. It was a good day for IFK Lidingö because Fredrik Johansson came 3rd and Annika Billstam won the women’s class. Results, splits and GPS tracking 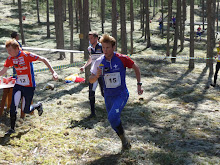 Elitserien continues tomorrow with Middle distance, but I will not run that race since I want to some good training this weekend and found 3 races too tough. The Middle distance can be followed live from 11.00 – 13.30 on Saturday. The last Elitserien race is a Sprint in Falun on Monday.

This weekend my Norwegian club Wing OK will arrange Trondheim Open. Sunday’s chasing start has GPS tracking that can be followed live from 12.00.
Posted by Øystein Kvaal Østerbø at 16:24