4th in 10mila with IFK Lidingö 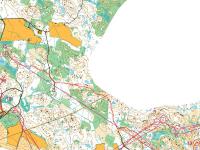 My club IFK Lidingö had great result in all the 5 major relays last season, finishing 2nd in 10mila, Jukola and Swedish Champs, and winning 25manna and Smålandskavlen. The winter training have gone well for the whole team, and we had quite big expectations for 10mila this year.

The Lidingö boys did a great job during the night, and sent me out on the 7th leg in the leading group together with 4 other teams.

I followed my plan and ran secure night orienteering in the beginning of the leg. Had company with Frol and SNO, but from the forking in the east part of the course I was alone (in 3rd position).

It started to be lighter when I headed back, and I tried to increase the speed. But on the long leg to the 15th control I lost more than 1 minute going too much to the right in the middle part of the leg. Tried to be accurate with the direction on the shorter legs in the green in the end, but missed the 18th control with almost 3 minutes. I was then passed by IFK Göteborg, Kalevan Rasti and Halden, and changed over as 6th team.

Filip and Mårten did great races on the following legs and brought us up in the lead before the last leg, but Fredrik didn't have a good day technical (even if it seemed like he had the highest running speed), and we finished in 4th position. It felt bittersweet since we were so close to the victory, even if most of the team did really well. IFK Göteborg won in front of Halden and Kalevan Rasti after a strong sprint finish by Eskil Kinneberg.

Lidingö's women's teams did also great, and finished 6th, 21th and 39th. We have already started to look forward to Jukola, that will be held in Finland in just one month.

IFK Lidingö's homepage has a report from each leg for both the women's and men's teams.
Posted by Øystein Kvaal Østerbø at 07:55