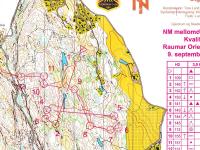 Last weekend the Norwegian Championship was arranged north of Oslo. Because I have had problems with my back the last month I skipped the Long distance, but since my back improved very much the last days before the race I decided to run the Middle distance.

The qualification went quite well for me. It was the first time since WOC that I could run relaxed in the forest, without being stiff in my back. I lost some time several places, but had no big mistakes, and finished 1 minute behind Carl Waaler Kaas. Results and splits. 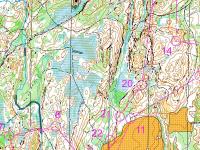 In the Final I lost 30 – 40 seconds to both the 1st and 12th control, and had also some other routes that was not optimal. My result was a 16th place, 2 minutes behind Lars Skjeset. Normally such a performance should have given a top 10 result, but it was many runners doing good races this year, and it was really cool that Lars was able to win (with only 1 second margin to Carl Waller Kaas).

My back was OK also in the final, and I have not been any worse after the race. But I got more tired physical then normal, probably because I have not been running much in forest since the end of June, both because of my preparations to the WOC sprint and my back problems. Results, splits, GPS tracking and replay of the video streaming.

After the Norwegian Champs the full team for the World Cup Final in Czech Republic and Switzerland was selected:
- Jakter gode opplevelser i neste års VM-terreng, orientering.no
Luckily I was already pre selected because of my 13th place in the overall WC.

This weekend I am running the Swedish Championship in Middle distance and Relay, and you can follow the races live with online results, live streaming and GPS tracking.
Posted by Øystein Kvaal Østerbø at 11:05