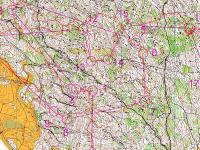 Last weekend the Norwegian team was running two selection races for the World Orienteering Championship in France together with the French team and some runners from Sweden.

The first race was a shortened Long distance in a very challenging slope called Prepoulain, and the map was really difficult to read in scale 1:15000. The start of my race was OK, before I did several smaller mistakes, and I ended my race missing more then 15 minutes on the 16th control. Most of the time I was inside the control circle, but I was not able to find the control. Thierry also lost 10 minutes on the same place, and according to our coach the map was totally wrong in that area. Olle Boström was fastest, followed by Audun Weltzien who was the best Norwegian in front of Anders Nordberg and Olav Lundanes. 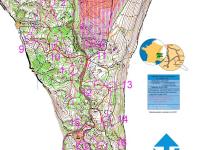 The second race was a Long distance on Herbouilly. It went much better for me, and I did only some smaller mistakes in the end of my race. Thierry passed me on the long leg to the 9th control, and I had contact with him for half the race. Thierry won the race with more then 6 minutes, so it was interesting for me to watch how he is able to orienteer so fast in this challenging type of terrain. My result was a 4th place, less than one minute behind Audun Weltzien and Anders Nordberg.